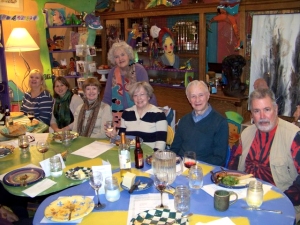 This photo is from last month’s Porch Stories, a storytelling event for KHOI Community Radio which I hosted at The Left Bank Studio. My concept of Porch Stories is “conversational storytelling over a meal,” and I tried to make it relaxing. We had a lovely lasagna dinner and I talked to the participants about storyboarding and outlining to organize a story. They quickly made a few notes, then started telling 5–10 minute stories and allowed me to record them for later broadcast on KHOI. They really got into it — we went around the group, and then started telling another one! The storytellers didn’t know what they were getting into, but I think they had fun (they wrote me thank-you notes!).

Next we have to edit the recorded stories for broadcast, and they might go on the air in March.

This entry was posted in Studio Snapshots. Bookmark the permalink.
Loading Comments...