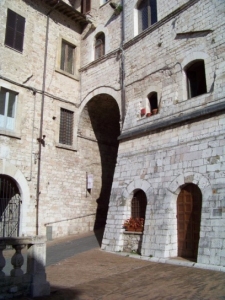 A street in Assisi

Earlier this month I got back from a Franciscan Pilgrimage to Assisi, Italy, and one of my hotels was around the corner from this street. We did a great deal of walking to historic sites in the area. Originally built in ancient Roman times, the streets are very narrow by today’s standards but you still had to watch for little cars! When the roads were first built the street level was 7 feet lower that it is now. In several churches they had clear floors so you could see down to the original foundation.

I’ll share more pictures of Assisi and thoughts about my Franciscan “journey” in an upcoming newsletter.

This entry was posted in Uncategorized. Bookmark the permalink.
Loading Comments...