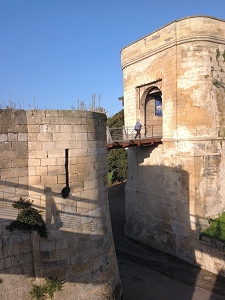 Scale model
of the castle

Before leaving France we took a day to visit historic sites related to the World War II Battle of Normandy, first hopping a train to Caen, a city not far from the D-Day beaches which itself suffered great losses in the war. In the morning we went way back in time touring the Château de Caen (Caen Castle), built by Viking descendant William the Conqueror in the 11th century and “one of the largest castles in Western Europe.” I felt like I was on a pilgrimage again, feeling the people that lived and worked in the castle in earlier ages. Archaeologists are still finding ruins there and the Roman influences.

In the afternoon we went on to the Mémorial de Caen war museum and memorial. It was very moving, like you were there; we went back in time again as we learned about conditions leading up to and during the war, the courageous Resistance, and the amazing engineering involved in the Allied invasion. We rode though small villages with our guide explaining what life was like in France. I could just see our soldiers peeking around the stone villages and trying to get through the thick hedgerows, a real stumbling block for our troops. This is how the farmers kept their animals and crops on their property as a sort of fence, but was impossible to go through.

At last we reached the beaches at Arromanches. This was holy ground for me; several people were weeping as you could imagine the cries of war. Many of the soldiers are buried near there, where they died, because there were so many. The ground still had bombshell craters that you could walk down into, and the original German guns can be seen on the cliff. We went to Utah, Omaha and Gold beaches and ended at the Normandy American Cemetery and Memorial, a beautiful peaceful space overlooking Omaha Beach.

Les Braves sculpture by Anilore Banon,
an “homage to courage” on Omaha Beach

This entry was posted in Travelogue. Bookmark the permalink.
Loading Comments...