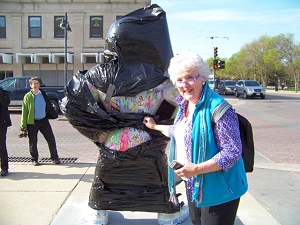 Unveiling “Herky’s Community” – someone took some of the plastic off the night before, probably looking for themselves in the paintings!

Monday was the great unveiling for “Herky on Parade 2,” a public art project that placed 84 uniquely-decorated statues of Herky the Hawk (University of Iowa mascot) around Iowa City, Coralville, and North Liberty. You can find the Herky that I painted, “Herky’s Community,” at Iowa Ave. and Clinton St. in downtown Iowa City, across from Old Capitol (update: the Herkys are being removed from the streets starting August 26, 2014). Many thanks to the sponsors of “Herky’s Community”: the Iowa City Downtown District, and the City of Iowa City!

Herky is more than six feet tall and could not fit in my apartment, so United Action for Youth allowed me to paint the statue in their Art Space. I drew landmark businesses in the Downtown District and a variety of Iowa City folk, showing the diversity of downtown. I’ve included working people, students, elderly, children playing, homeless, musicians, bicyclists and all the people that make up the Iowa City landscape. I wanted Herky to connect not only to the University, but also to the larger community of Iowa City. After all, they’re all intertwined.

I used acrylic and latex paint and paint markers to gain some of the vibrancy of watercolor technique, but focus more on the drawn images, detail in the faces, and the actions of the people. It was a delight to have people find themselves on Herky. One gentleman told me it may be the only time he would be commemorated in his life, which was very touching and just what I wanted — to honor all in Herky’s Community.

The statues are on public display through August 25, 2014. You can find maps and pictures of all of them on the Herky on Parade 2 website – there are 23 Herkies just downtown!

Herky in progress –
his shoes are buses 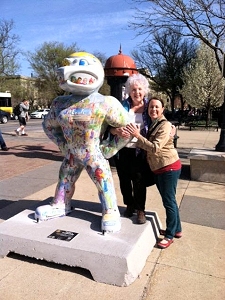 Daughter Shelby and me,
hugging Herky

This entry was posted in Studio Snapshots. Bookmark the permalink.