I based “Elsie” on my grandmother because of her determination and perseverance (smaller study on the right,
full-sheet painting on the left). 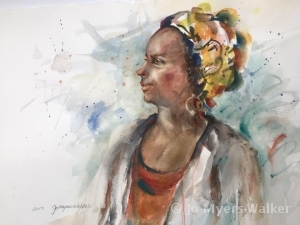 The strength and determination
of “Patience” are visible
in her face and demeanor.

Friend Mary helped me transport two paintings and a sculpture to Muscatine Art Center for their exhibit “Hard Won, Not Done,” works by 24 eastern Iowa women artists commemorating the 100th anniversary of the 19th Amendment to the U.S. Constitution, which gave women the right to vote.

Update:  Out of concern for everyone’s health regarding COVID-19, the Muscatine Art Center has closed for four weeks effective March 20, which extends beyond the scheduled ending date for the exhibit (I had also been scheduled to participate in a panel discussion during that time). Keep an eye on their Facebook page for updates as they re-assess when to re-open!

“Hard Won, Not Done” was just one of three exhibits at Muscatine Art Center at the same time, inspired by the 19th Amendment milestone.